Jeff Allen Comedy: The America I Grew Up In Tour 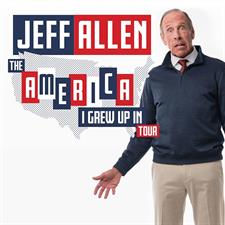 Jeff Allen is a favorite with families of every generation across the country. Performing comedy for over three decades, Jeff Allen’s work has been seen on every cable comedy show in the U.S. including Comedy Central’s Premium Blend and VH1’s Standup Spotlight. His one-hour special, “Happy Wife, Happy Life” aired on the Odyssey Channel and Family Net. He’s been featured on the Grand Ole Opry, the U.S. Comedy Arts Festival in Aspen and the Montreal “Just for Laughs” International Comedy Festival – the world’s most prestigious comedy venues. Jeff Allen is regarded as one of the premiere clean comedians working today. Most of his humor centers on marriage, living with teenagers and American, before we all went crazy– material to which everyone can relate, confirmed by his over 10 million views on Youtube. The humor he packs into his performance comes rapid-fire, and doesn’t stop until the end.

“Jeff has become a master of the difficult are of comedy. If an election were held today, and only comedians were allowed to vote (and not vote for themselves), Jeff would win in a landslide.” – Andy Andrews, NY Times Best-Selling Author