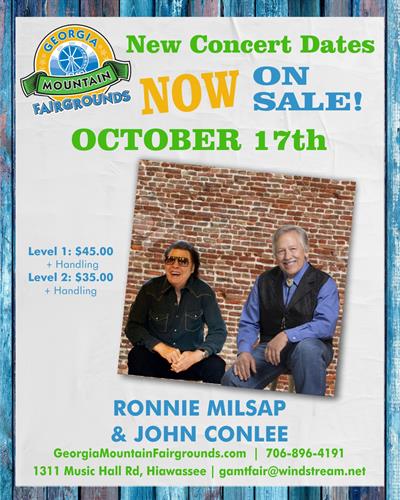 Event Description:
Ronnie Milsap
Born blind (his family thought it was retribution for sin), Ronnie Milsap’s grandparents gave the boy over to the North Carolina State School for the Blind hoping for a better chance.  There, Milsap discovered music – deviating from the school’s classical curriculum to explore the nascent realms of race music, rock & roll and jazz. It was Ray Charles who told the young pianist when he was offered a scholarship to Young Harris College’s law program, “Son, I can hear the music inside you…” It settled Milsap’s fate.

John Conlee
Forty #1s. Five decades of charted singles. Creating a new way of recording (being blind his hyper-attuned hearing led him to create/build what is now known as Ronnie’s Place, where the new album, the Duets, was captured), he broke genre rules and became one of the biggest pop/AC and even R&B artists of the late ‘70s and early ‘80s. Six Grammys. CMA Entertainer of the Year and four Album of the Year Awards.


John Wayne Conlee is an American country music singer. Between 1978 and 2004 Conlee charted a total of 32 singles on the Billboard Hot Country Songs charts and recorded 11 studio albums. His singles include seven #1 hits: "Lady Lay Down," "Backside of Thirty," "Common Man," "I'm Only in It for the Love," "In My Eyes," "As Long As I'm Rockin' with You" and "Got My Heart Set on You." In addition to these, Conlee sent 14 other songs into the Top Ten.