A new concert series is in the works for downtown Hayesville, North Carolina. Thanks to the Beall Center, Clay County Community Revitalization Association (CCCRA) and Mountain Area Storytellers, we are set to kick off a new live concert series at the gazebo on the square at the historic courthouse. Folks from Clay, Cherokee, Macon, Towns and Union Counties are invited for a fun-filled evening. The concert series is called FRESH AIR - Stories on the Square.

Performers from North Carolina and Georgia will take the stage. The new series will have stories and music with storytellers, writers, poets and singer-songwriters. This is a free event and the public is invited for a talent-filled evening as we "reinvent" the old time variety show. Everyone is invited to bring a folding chair, a picnic, and their favorite beverage. If there is rain, the show “must” go on and will be moved into the Beall Center to  the courtroom of the old courthouse building.

The FRESH AIR concert series is a three-concert series. These are Friday events with the first being Friday, April 23rd. The next will be in the summer, July 23rd, and the third in the fall, October 29th.  These are fund-raising events with voluntary donations supporting the activities the CCCRA.

The line up for the April night includes Georgia storytellers Denise Mount and Charlie Parrott and North Carolina storytellers Alex Peers, Nancy Reeder and Kanute Rarey. There will be music with Georgia and North Carolina singer songwriters, Tom Edwards and Mike Whitney. There will also be writers and poets taking the stage and bringing their words to life; North Carolinian Bob Grove and Sandy Benson and Georgian Carroll Taylor. Each concert evening of the series will be a new show.

There will be free tours of the newly renovated, old courthouse on the square in downtown Hayesville before each event. 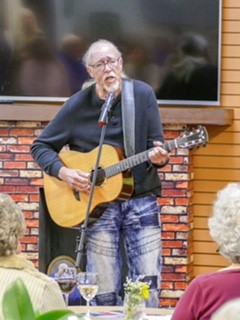 This is a fundraising event - donations will be gladly accepted.